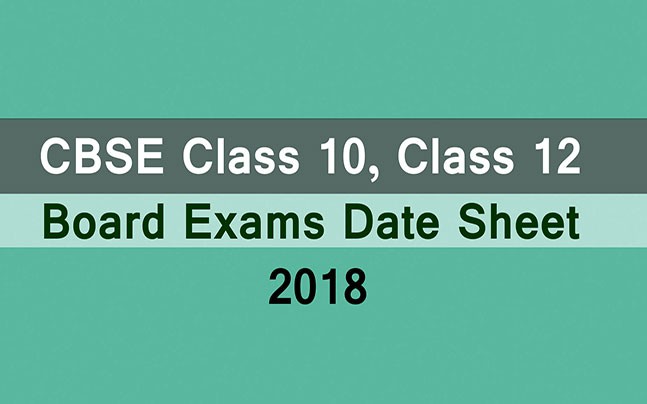 CBSE Re-Exam Dates 2018 will be declared within a week time as per the notification. The 10th exam was conducted on 28th March 2018 while the 12th Economics paper was held on 26th March 2018. Today, CBSE has canceled both examinations. New dates will be announced soon on the official website of CBSE. Students need to check the CBSE websites for the new dates. The exam schedule, date and time will be notified shortly.

The board has said that the new dates and other details will be published on the CBSE website soon. The decision to cancel the examination was based on the reports of a paper leak. In order to maintain the purity and fairness of the board examinations and in the interest of the students, the Board has decided to take the re-examination of the said subjects.

On Monday, economics paper was claimed to leak on the social media websites, after which the 12th CBSE students were stirred up. Although CBSE had dismissed these claims saying we have inspected all the examination centers, question paper has not leaked. But CBSE has filed a complaint to the Delhi Police. Delhi Police has registered FIR on CBSE’s complaint. The police investigation has started under Section 420, 468, 471 of the IPC.

Prime Minister Narendra Modi has also expressed resentment over the paper leak. According to the government sources, students do not have to worry and students’ interests will be taken care of. Now, as per the sources, the government is planning to implement a safe system to avoid paper leaks in the re-examination. As per the Minister Prakash Javadekar Government has taken the strong measures and Electronic Coded Paper will be sent to the Examination Centers. The Electronic Coded Paper would be Password-proof and will be sent only half an hour before the exam. Also, the exam paper will be printed on the examination center just before the examination.

The 10th-12th board examinations began on March 5, 2018. Class X board examinations will run until 04 April 2018. Class XII exams will be running until 13th April 2018. At the same time, CBSE will release new dates for the upcoming exams. So, Students need to check the CBSE website time to time for the new exam dates. The Maths and Economics re-examination will be conducted soon as per the officials at the CBSE. Please check this page time to time for the new dates.

Iconic One Theme | Powered by Wordpress